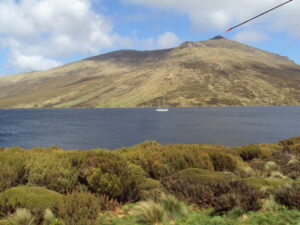 The name “Perseverance DX Group” originated during a planning session for The Mellish Reef 2014 DX-pedition.

In 2012 several of the founders were together on a DX-pedition to New Zealand’s Campbell Island, a Sub-Antarctic outpost 700 kilometers south of New Zealand. Our boat was anchored in Perseverance Harbor during the expedition. It seemed appropriate to use the name of a harbor that requires one’s perseverance to endure the changeable weather.

In 1810 the harbor was named after the sealing brig Perseverance. Its captain was Fredrick Hasselborough, the Perseverance was owned by Robert Campbell of Sydney, Australia, thus the name Campbell Island. Captain Hasselborough drowned on 4 November 1810 in Perseverance Harbour. The small boat in which he was transiting from the ship to shore was flipped over by a sudden squall. He was wearing heavy wool clothing which quickly became water laden. Reports indicated that two other people also drowned in that incident.